This years Cisco’s annual security report is out, and it comes loaded with lots of data worth noting. So, let’s start with the big numbers: 99 percent of all malware in 2013 was targeted at Android devices. In addition to this, Android users also had the highest encounter rate (71 percent) with all forms of web-delivered malware (which you can see in the graphic below). 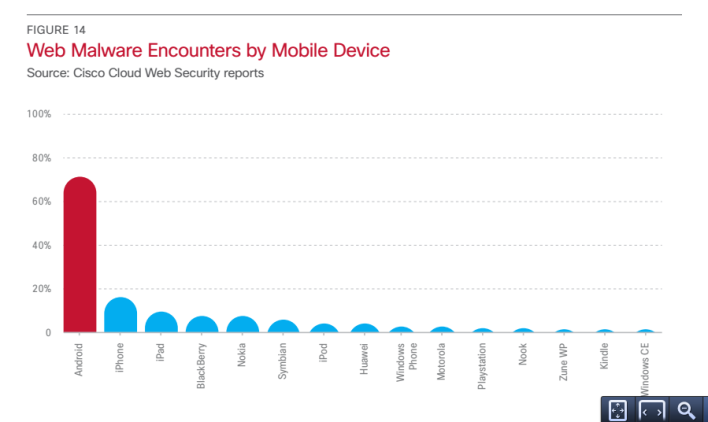 Don’t let this scare you out of using your phone or tablet: The real-life problem isn’t quite as dramatic as the numbers make it sound. The report notes that mobile malware that targets specific devices only accounted for 1.2 percent of malware encounters (the rest primarily involved phishing, likejacking and forcible redirects on the web). And according to Cisco, the most commonly encountered form of malware was Andr/Qdplugin-A, which was often disguised alongside legitimate apps and sold through unofficial marketplaces. So as long as you stick to Google Play you’re far safer from a security perspective (remember that to use outside markets you have to tick the “Install Apps form unknown sources”, so keep it unticked to stay on the safe side).

Also worth noting is that, is Apple’s Phil Schiller, who shared the link without a comment on Twitter today. Schiller is the senior vice president of worldwide marketing at Apple. And of course, the fact that iOS devices were mostly exempt from malware last year is a fact worth marketing.

iThere are no comments